I haven’t been to Red Rock Canyon State Park in about 12 years. My memories of the place have faded, but I do know my time there was for my Geology course back in college. Fast forward to 2016 and it was time to head back out there. This time we would be spending Thanksgiving there with family, exploring, and creating a lot of first time experiences for Jaden!

Jaden and I were up at 6 AM. Everything was packed and setting by the front door. The plan was to leave at 9 AM and arrive at lunch time. I went to wake up Diana at 7:30 AM and found out she was sick with a bad cold. She insisted we go on ahead and that I give Jaden his first camping experience. She would be fine, so Jaden and I were on the road down to Red Rock Canyon by 9 AM.

The traffic was not bad at all and no accidents along the way either. We made a couple of stops along the way and soon arrived at Red Rock Canyon State Park around 12:05 PM. I received a message from John stating they were at campsite #6 in Ricardo Campground. Leaving Highway 14, we took a dirt road up to the visitor center and found campsite #6.

We greeted each other and Jaden was excited to see his grandparents. He soon discovered the camper and enjoyed knowing he could check it out. Glenda had timed the preparation just right for a Thanksgiving lunch. Turkey, mashed potatoes, green bean casserole, homemade rolls, blackberry pie, and cranberry-orange relish was our meal. It was very delicious and greet views while we ate! Cleanup followed and then adventure began!

Our first adventure was to the bathroom. It was time for Jaden to use it before exploring. Plus he has never seen a camping pit toilet, so I was curious. All went well and then we headed the opposite direction on a trail to a dried up river bed. We snapped a selfie there and I showed Jaden a couple different cacti along the way. We soon headed back to the campsite to get John. From there we headed towards to visitor center to pay for our camp site.

Jaden wanted to hold John’s (Grampy) hand for the journey. Along the way to the visitor center, John encouraged him to climb up on the rocks and over small mounds of soil to “see what’s on the other side.” Jaden went along and it was a good thing. Soon we climbed a very small one only to find a larger one to climb on the other side. Jaden inspired by his first climb wanted to get to the next one. We explored around the small hill to find a way to the top. Jaden and I made it up there and looked back to see John waving at us. We then returned back to flatter ground and followed a “trail” (e.g. wash) to the Visitor Center.

We spent some time in the visitor center. There was a movie exhibit showing all the old western movies filmed there. John stood by a life size image of John Wayne and I grabbed a photo for him. We then went over to the nature exhibits and let Jaden touch the different types of rock one can find in the Park. We then checked out the dinosaur bones and more before heading back to camp.

Options were presented to us on how we should get back to the campsite. Should we retrace our steps, follow the dirt road, or take a new trail? Jaden wanted to follow the road so we marched along. He read a few signs posted along the way and I had him stand by a group of Joshua Trees. I snapped a photo and sent it back to Diana. Yes, you can get AT&T cell service in camp, but it is spotty and the signal strength/ data rates varies (E, 4G, and LTE).

Once at camp Jaden wanted to explore the camper with Glenda (Grammy). He also helped out a bit in there too while John and I visited outside. I found a cell signal again so checked on Diana to see how she was doing. About 10 minutes later it was time for another adventure. This time we were going to head west and explore the hills behind campsites 7, 8, and 9.

Jaden seemed to be having a good time observing the desert landscape. In fact, all the trails had highway numbers like 99, 5, 14, 58, 168, 180, etc. We would come to junctions and state which highway we should go on. Jaden happily played along and steered us further up and around the hills. We did have to encourage certain paths to take and he didn’t resist much at all. 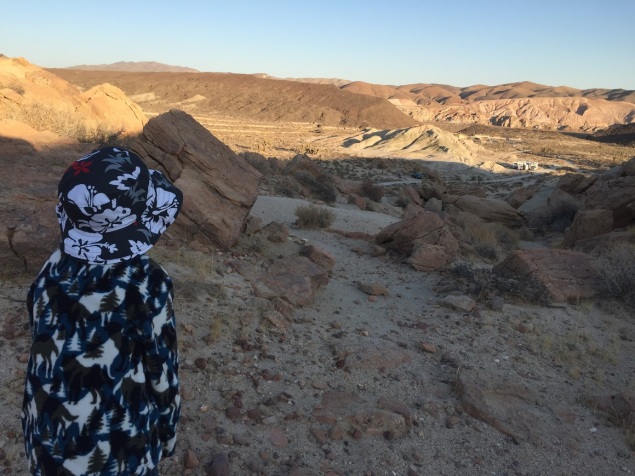 We made our way up another wash and climbed up a nice amount for Jaden’s first time. Eventually we made it to a vista point where we could look back down on the campground. It was a nice view with the setting sun. Jaden wanted to get even higher, but we encouraged him to head in another direction for now.

Heading back down John and I saw a group of Joshua Trees. We decided to make a game and told Jaden we should go look for treasure in that direction. No resistance was presented as we continued up the wash to the “treasure” area. Once we arrived, we encourage Jaden to look around. John pulled out a dollar and hid it under a rock. He left about half of it visible. Here both John and I chuckled as Jaden looked under every rock he could but the one he sat by (see photo above). We directed him to look at a rock “over there” and he reached passed the rock with the dollar to another one. Eventually he did find it and was surprised. He then wanted to hide it for us to find and we did so. Soon the fun of treasure hunting was over and it was time to go back to camp.

Arriving back at camp, it was time to set up our sleeping area before it was dark. Jaden returned to playing in the camper and hanging out with Glenda while I made the bed. John and I talked about how the mattress works. It took about 2 minutes to setup with the included blower. He was pondering getting one like it for a quick fishing trip. He would not need to haul around the camper. Anyway, the bed was soon set up and dinner was going to be served.

Dinner was reheated lunch or good ol’ Thanksgiving left overs. This time a salad replaced the green bean casserole. Very delicious and apparent the Kangaroo Rats thought so as well. John and I ate outside during the time while Glenda and Jaden were inside. The crumbs from lunch were apparently pleasant to the little guys. In fact, one came up to my shoe. I grabbed a photo with my phone as they were obviously use to humans.

Night time was upon us and the temperatures dropped. John started getting a fire going while I found the smore ingredients. At this point two Kangaroo Rats joined the fun. We almost stepped on them a couple times too. One jumped about a foot into the air when John started to split wood. It was pretty funny. Glenda would not come out until they were gone. Being dark and not able to see them, we encourage both Jaden and Glenda to join us. I helped Jaden roast his first marshmallow. He enjoyed it and some more goodies before calling it a night.

It was getting pretty cold, so Glenda and Jaden headed back into the camper. I took advantage of this time and started doing some night photography. I wanted to improve my limit skills with this technique and try some things out that I read. Glenda told stories to Jaden in the camper while I finished up my photos. 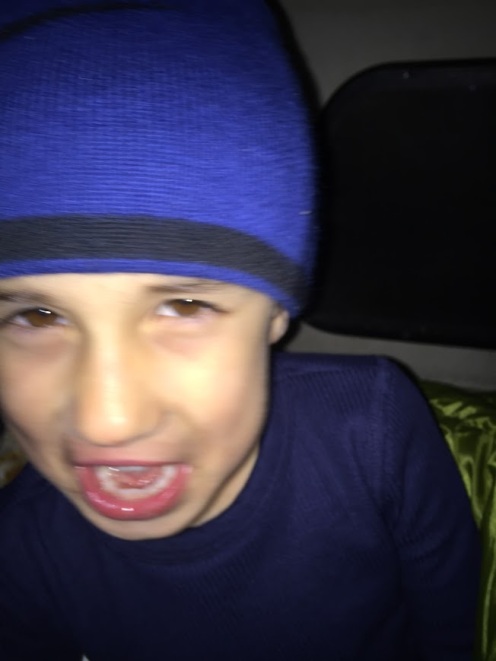 Finishing up my photos I went into the camper to help get Jaden ready for bed. The process didn’t take too long at all and we were soon in the back of the truck and going to bed. I snapped a photo of him before he fell asleep, which was not right away by any means. I expected that too and tried to make it as fun as I could for the next 30 minutes to an hour. Soon Jaden was out at 8 AM and I was too.

The night was a long one for me. I was up several times throughout the night checking on Jaden. He was in thermals, but the night was a cold one for sure. Our bags were rated at 20, so I was not overly concerned. I did put his ski cap back on which helped him from wiggling so much. He is an active mover in his sleep prior to this and all the room on the mattress seemed to spur his activity haha. He even chuckled once by my ear that startled me awake. Needless to say we made it just fine (I was really tired) and it was time to start the day. 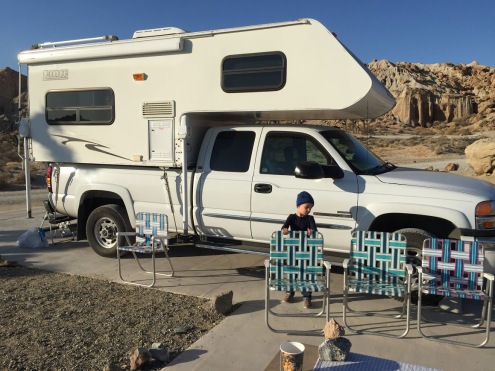 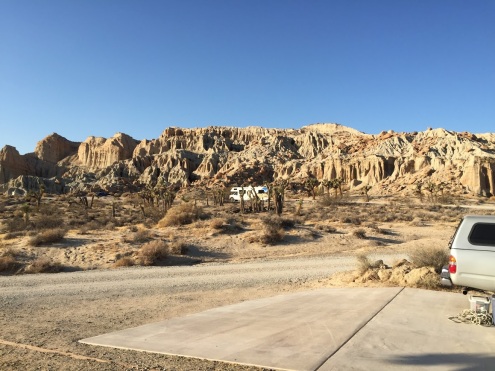 The windows inside the camper shell were iced over. The condensation froze from our breath overnight. We quickly got all our warm layers on and went outside. Returning from the bathrooms Jaden setup the chairs. Glenda and John were up and invited us in for breakfast. It was toasty warm inside too. Following a warm meal I could finally feel the warm returning to my feet. Crazy! 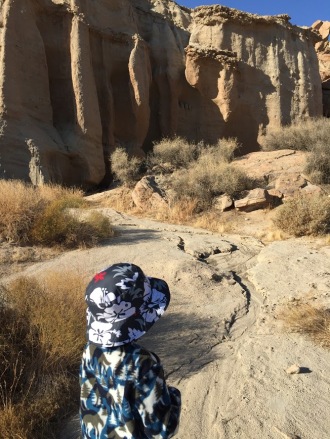 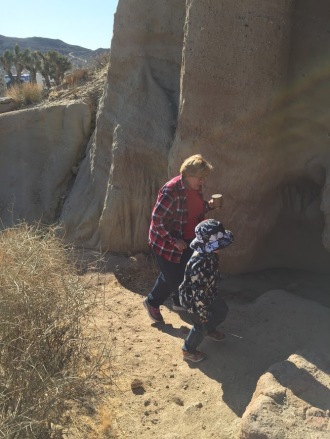 The temps had warmed up significantly enough to shed a few layers. Filled with food too we were warmer and ready to go exploring. This time we headed up the same hill west of the camp but we went direct. There was a night path on the way up and so we marched all the way to the top as Jaden wanted to get to yesterday.

We made it to the top and I snagged a couple of photos to show how high we traveled. We enjoyed it for a moment and Jaden was ready to move on to the next adventure. Our descent comprised of retracing out steps from the day before.

Along the way we heard a strange bird noise. Jaden looked up and saw Glenda coming around. He ran to her, gave a hug, and walked back with her the rest of the way to camp. 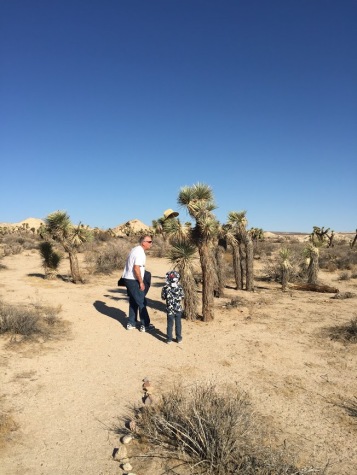 Our last adventure for the day was looking for “red rocks” in the Park. We headed out to the dried stream bed and walked down one and back up another. There were plenty of red rocks, but Jaden was not buying it. He didn’t think they were red. We saw a variety of colors too in this great search for a Jaden red rock. Unfortunately we did not find one so we headed back to camp to grab some lunch. It was at this time Jaden spotted a red rock by the camp fire pit. Go figure that is where it was the whole time, but it was fun to still be exploring with him in the desert.

Lunch was more Thanksgiving left overs with the addition of an apple crisp dessert. Another wonderful meal before getting on the road to go home. We left about 130 PM and made our way back home. It was a wonderful time and Jaden mentioned when we were going to go camping again. I smiled and said we will have to soon.