The Kings River Trail is located on the north side of the Kings River within the Sierra National Forest boundary. On the opposite side the river is shared with the Sequoia National Forest. The drive is a long one from Clovis/Fresno (about 2 to 2.5 hours), but the added solitude one can find is worth it.

The drive to the Kings River Trail started at 7 AM. My coworker Steve came along with me to check out some sites he wanted to update for his records. We arrived at the trailhead around 8:40 AM. It does take some time weaving around Pine Flat Reservoir and then the 6 miles of a bumpy dirt road (Granite Dike Road). The dirt road was originally built for a mining claim during World War 2 for tungsten. Now it is used for recreation purposes. 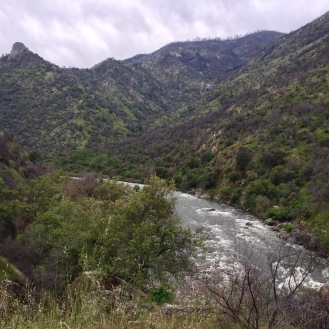 Once at the trailhead we proceeded across a creek and on the dirt road. A gate shortly after is permanent closed to the public and rightfully so. The road is really bad and narrow. The trail follows this for about an 1/8 of a mile then dives off to the right. A footpath is clear to follow, but you can tell it was originally an old road. Probably after another prospect of the mining operation. Views of the Kings River are in view as the hike continues. 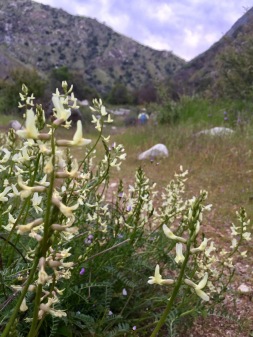 Even for an overcast day, the wildflowers were out in abundance. Many of them were about the size of a pea and were alongside the trail. I could imagine in full sun the flowers must “pop” in color for users of the trail. Nevertheless, it was still a beautiful walk, great temperatures, and pleasant views of surrounding topography. 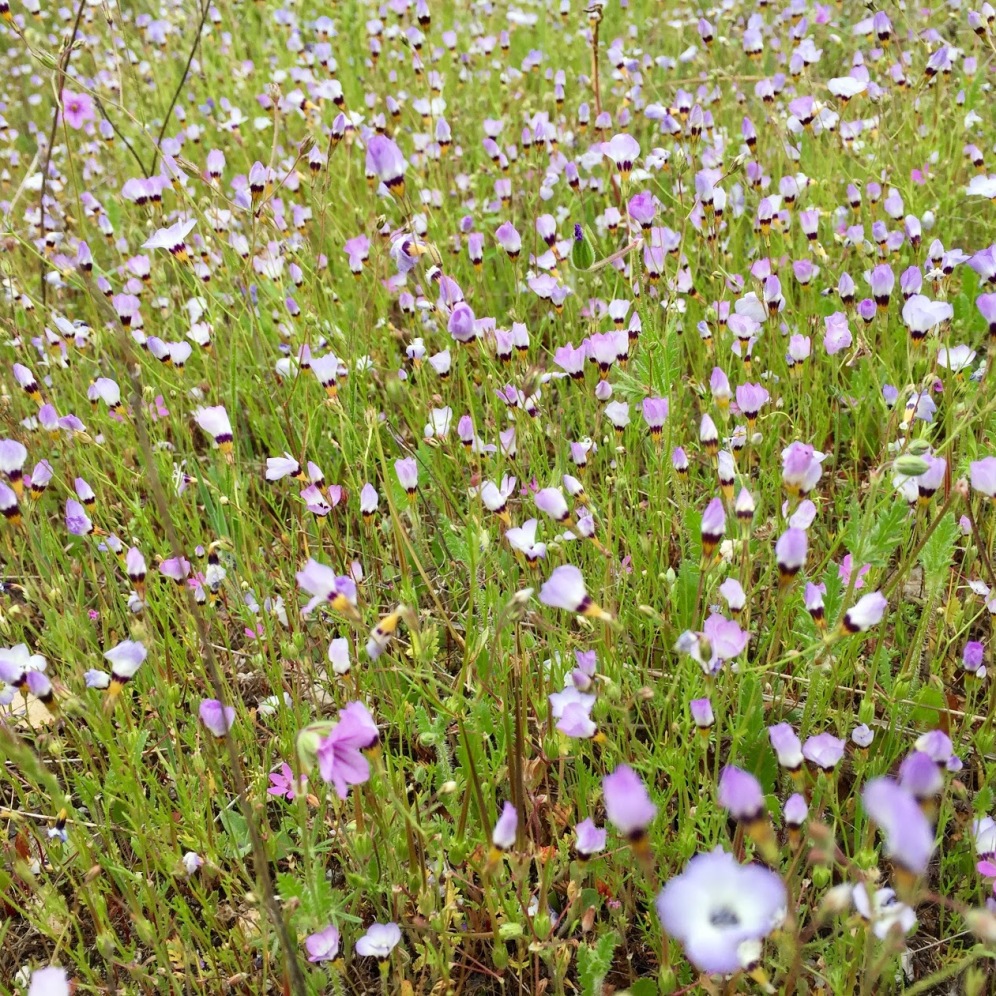 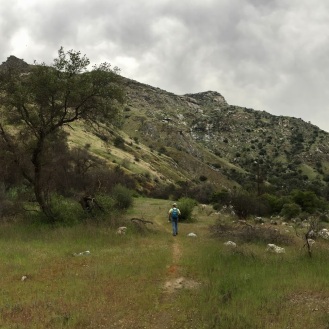 The hike was going quick and we were making good time. The incline almost feels non-existent so one can hike at a consistent pace. The trail was well defined in most places. Even when we came across grass up to our hips, you could still navigate through it all without worry. No ticks were present either, which was great news! The trail would go out near the river for a nice photo and then tuck back in among the hillside. 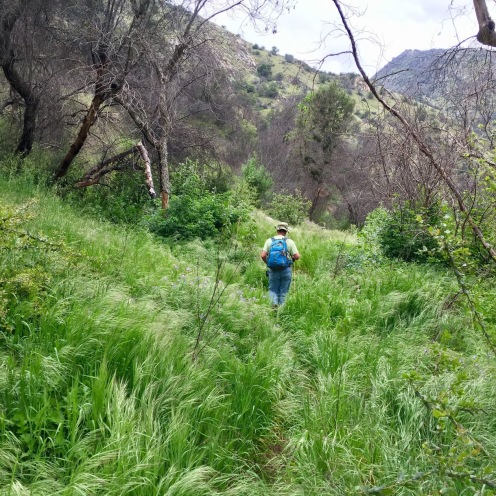 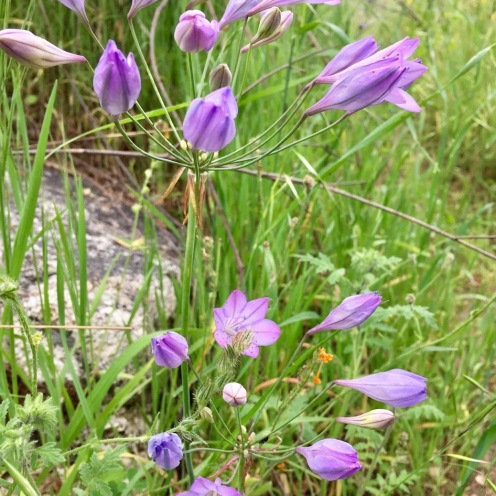 Where there was water flowing or had recently, the vegetation was thick. Poison Oak also enjoyed these areas and was flourishing nicely. Part of the Rough Fire could be seen across the way by the black sticks standing in the air. The portion we were walking was no exception. Oak trees were dead in some areas and at least torched. Where the dead trees stood sprouts of new life were rising up to take resume their lives. 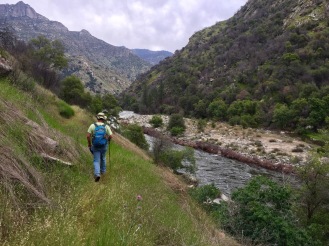 Around 2 to 2.5 miles into our hike we came across wild cucumbers. They look like softball size thorns. They grown on a vine as well, so they were across the trail and even up in trees. I had to stop and take a photo due to their size. I did ask someone once if you could eat them. They were not a 100% sure, but said they are not like the cucumbers you get in the store. Inside the thorny shell is a gooier fruit similar to the consistency of an Aloe Vera plant or gelatin. Doesn’t sound appealing to me personally, but they look cool.

Approximately 3 miles into our hike, there is a nice flat with what looks to be Geoffery Pine trees. Upon investigation there is also a dispersed campsite there. Close to the Kings River and a nice spot for a break. I later learned this was called “Upper Pinon Camp”. On the USGS topo map we had it was near “Mill Camp.” We were not sure which was correct, but there was a fire ring and down limbs used as furniture. Probably a good fishing spot or base of operations. 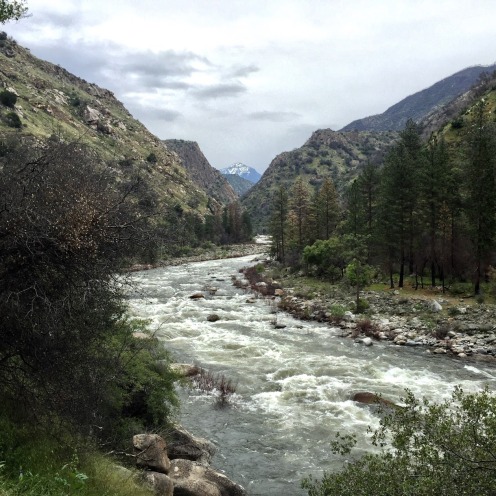 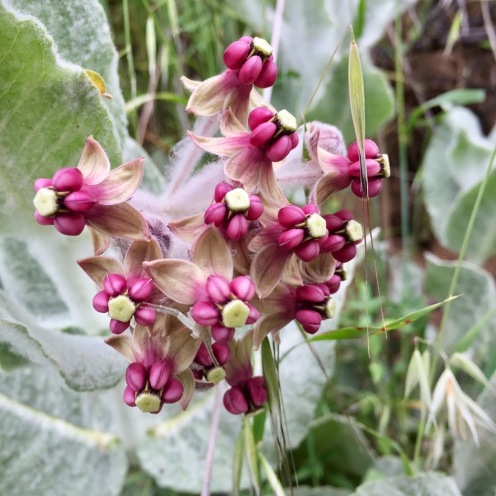 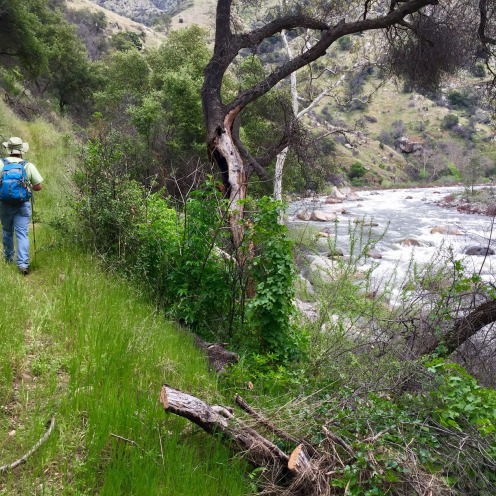 Continuing on the trail started to become covered in the grasses and shrubs. It was still visible and one could make it out. However, you could tell the trail use was dropping from here and progressively did so. The views were getting better though and we saw our first snow covered peak while on the trail.

We soon arrived at Spring Creek. It was about a quarter mile or less from the Upper Pinon Camp area. The creek was flowing nicely and as soon as we crossed a surprise waited for us. A small double waterfall was upstream and in view. We climbed up to one side and I grabbed a panoramic photo. We had a snack and some water while enjoying the sound of the water rushing by.

We were about 3.5 miles into our hike and wanted to see how far the trail went. On the map it made its way to Garlic Falls and stopped. Unfortunately our journey would not even get close as the trail quickly faded away. I suspect the Rough Fire in 2015 along with the following precipe events washed it away. We found about 1/8 of a mile of trail bed left. Deciding it was no use to continue and the Kings River too high to navigate alongside it, we turned back.

The way back was pleasant and again we moved quickly. Our lunch break was at the Upper Pinon Camp we discovered. It was a great spot to. One could see water seeping from the rocks on the other side of the canyon and joining the raging Kings River. The slight breeze kept the face flies away and pretty much any flying insect. We chatted a bit and then headed on our way. 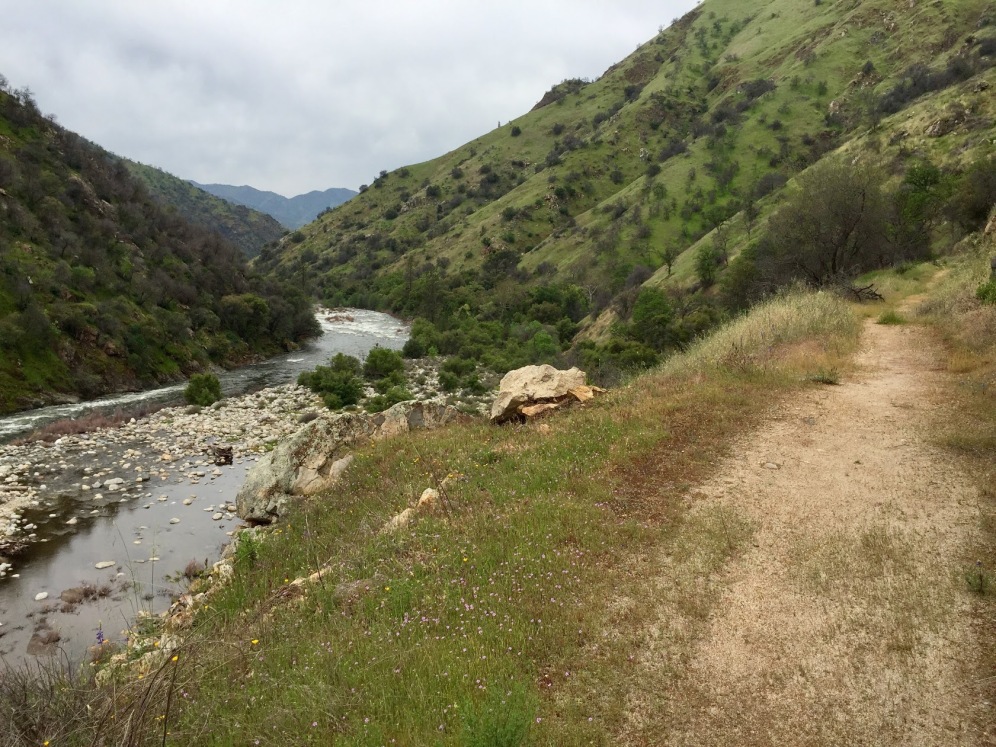 We passed by the lower camp about 30 minutes later and made a small climb back up to where the old road ended. Even though the trail was familiar from heading eastward, travel back westward provided almost new scenery and perspective of the valley. I noticed some things we had missed along the way out, such as a succulent growing on the rocks where the road ended and actual trail began.

All in all we did about 8 miles in 3.5 hours. For surveys, a break, and lunch, we had about 1 hour down time. It was a great way to spend a cool Thursday before the storm that was coming in. Not one drop fell on us during our adventure up the river and back. It would have been nice to make it all the way to Garlic Falls, but alas that was not possible. Hopefully the National Recreation Trail designation on the Kings River Trail will get some extra funds for repairs. It is nice to have a lower elevation trail to take advantage of when the higher country is snowed in.