One of the things I wanted to do before the summer was over was to take River on another day hike. I had a few places in mind and one of them was to just do the same loop last year. However, I already did that one with Jaden and wanted something new. Thus a day hike to Cliff Lake in the Dinkey Lakes Wilderness was the winner.

It was on a Wednesday that I loaded River into my truck to head up the mountain. She was so excited. My hiking attire was on and, even though we had only been out a couple times last year, I could swear she knew exactly what we were doing. On the road we went up to the Cliff Lake Trailhead near Courtright. It was about a 2.5 hour drive, but all on pavement. 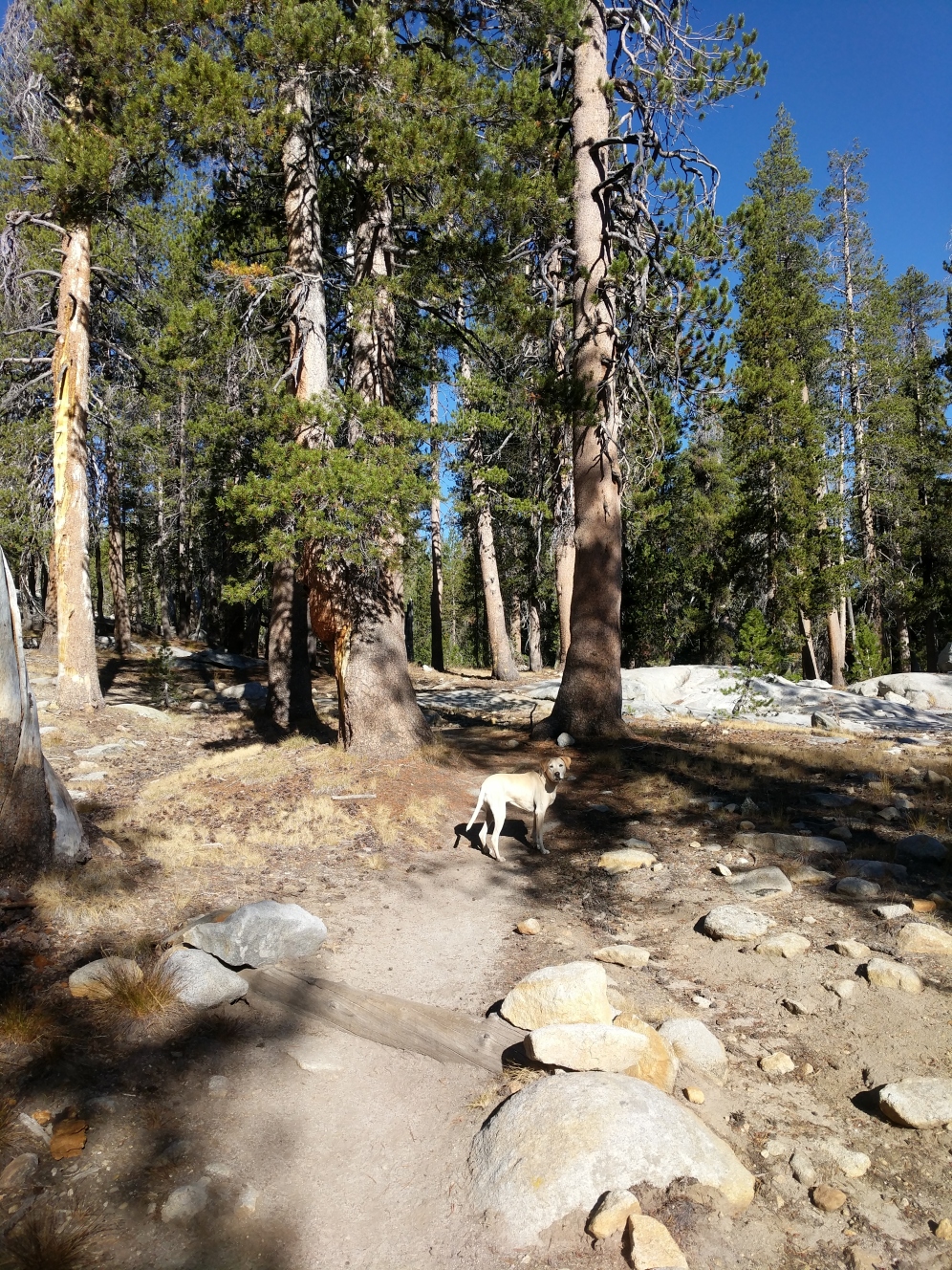 Arriving at the trail, there were a few other vehicles. In fact a couple from Russia arrived at the same time. We chatted briefly and then, an anxious dog rocking the truck, let River out to set off on the trail. She was so thrilled to be out hiking again. Her usual up and down, back and forth, walk already set her to do additional mileage for the day. Both her and I had never been here so everything was new. Temperatures were great. A high of 65 that day, so yes it was chilly. I almost put on my down jacket, but decided against it. It was a good thing too because in 15 minutes it was just perfect. 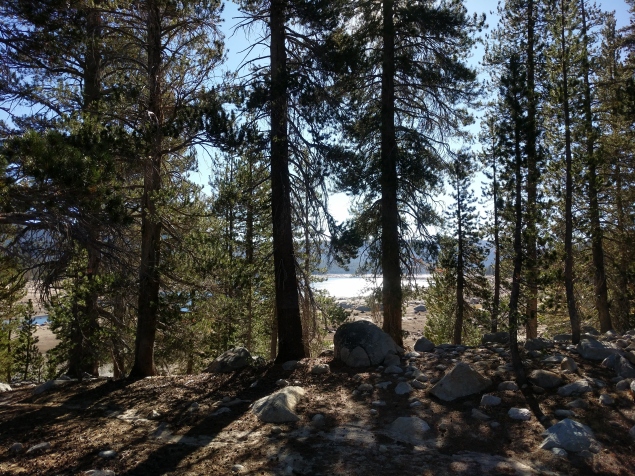 The trail starts off by going downhill. Eventually it crossed a couple causeways, which were new to River. She waited for me to try them out and then quickly proceeded ahead. After a small trip, she realized she needed to just slow down and walk easy. With two of them down the trail went north along a contour and provided views of Courtright. It was definitely low, let alone all the water crossings so far were bone dry. I was kind of figuring the only water source would be Cliff Lake and planned accordingly. 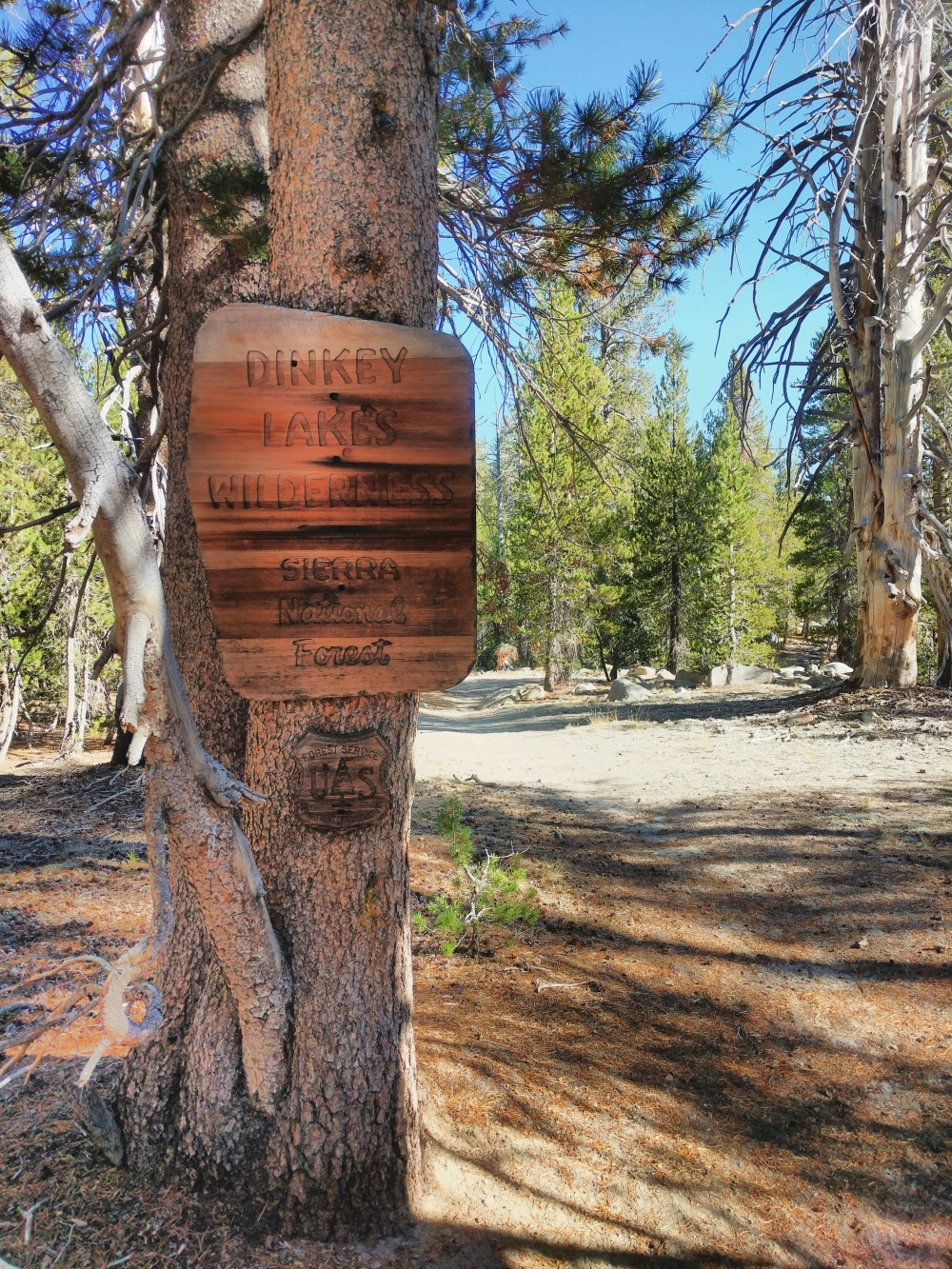 River and I arrived at Nelson Creek, just a few hundred yards before the Dinkey Lakes Wilderness boundary sign. There were pools of water, which I stopped to let River get a drink. Both of us were still very much excited to be out hiking that we didn’t stay long. River didn’t drink much and really wanted to keep going. Shortly after we passed the boundary sign and proceeded up the trail. At this point the trail is slowly going uphill, but I knew soon enough it would increase in difficulty.

The trail continued a gradual climb. The morning was still cool in the shade too. The trail was quiet. We did not see anyone at this point. The only sound was the trekking poles and a few birds chirping away. I had been told the trail had erosion issues and I started to see where. The trail went through a flatter area containing a small wetland. The trail had obviously become a flow on and off enough where users were creating parallel reroutes. There is nothing much you can do here but either fill it in or let the land heal itself over time. 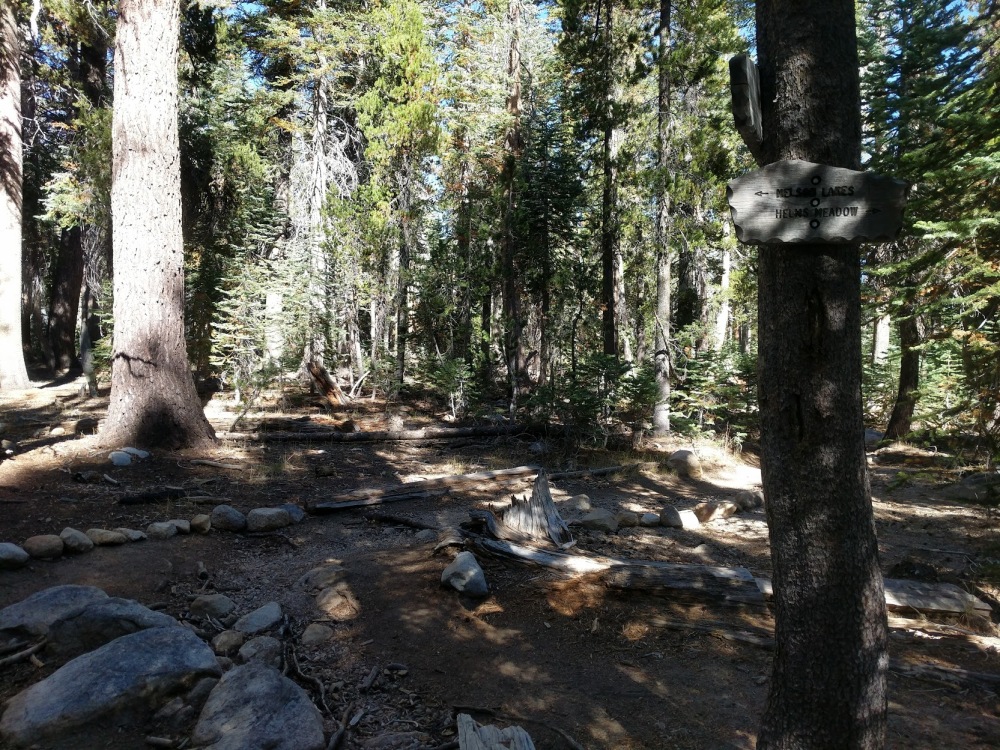 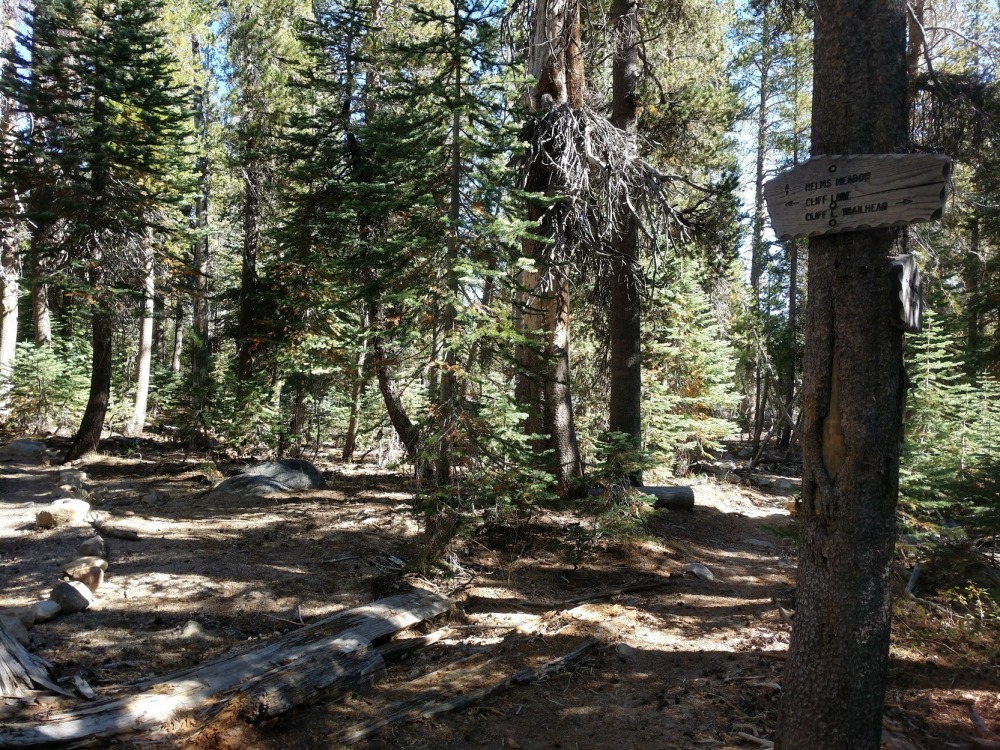 Soon after getting through the wetland area, we came up to our one and only trail junction. Here we needed to continue straight ahead up to Cliff Lake. I will have to check out Nelson Lake sometime in the future. Today it was Cliff, so we pressed forward. The trail was starting to increase in difficulty and the temperature was warming in the sun. The trail was need some help at this point too. This must have been the section peopled talked about. It was near the top of this section both River and I took a snack break. 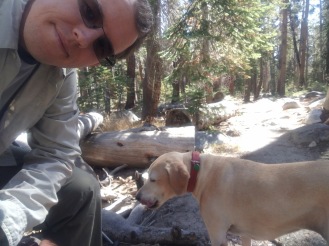 The break was about 10 minutes time. I was still needing to get this job done and back in time for something at home. River always watches me eat my food first hoping to score something that falls out of my hand. I did pack her dog food, which she did eat. However, it was only I had finished up mine and started to enjoy the scenery. Once she gobbled down a good amount we were back to heading uphill.

Another 10 minutes of hiking and we arrived at the pull up to Cliff Lake. It was rather short lived compared to what I thought it would be. The switchbacks are very nice, just don’t get it confused with shortcuts people have decided to add. They are much more difficult if you get on one and cause so much erosion problems. Anyway, I would say about 5 to 10 minutes and we were at the top. The hardest part was behind us. 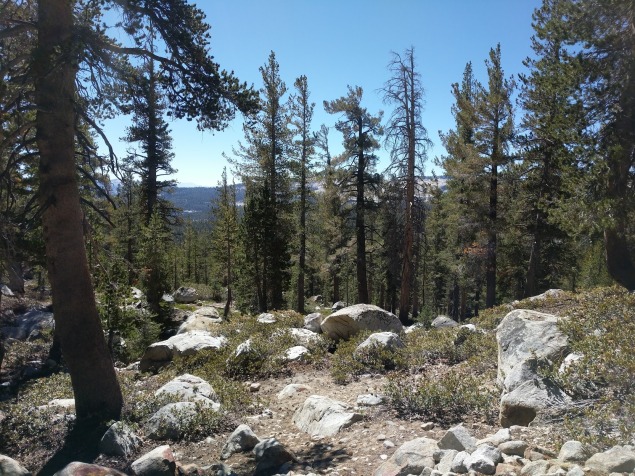 At the top there was a small sign to make sure you knew where the trail was located. A big dispersed camping site was there, so I could see how it may be easy to miss where the actual trail would be. I took another break off trail with a view before continuing up to Cliff Lake. Done with the break and about 5 minutes from the lake itself, I ran into a coworker and her family member. She had wanted to do a quick hike up to Cliff Lake while someone was watching her kid. A nice day for a break and to get outside. We did scare each other initially. I think they saw River first and probably thought mountain lion ha ha. After a couple minutes chatting, we departed for our destinations.

Cliff Lake was pretty. The wind was howling along and the temperature did drop. We took a break here too. River I think may have been a little cold as she was trying to find a spot out of the wind. I almost put on my packable down jacket. The wind brought cool air and combined with the water it was chilly. We soon departed for another lake though before head back. It was just to the east of Cliff Lake. 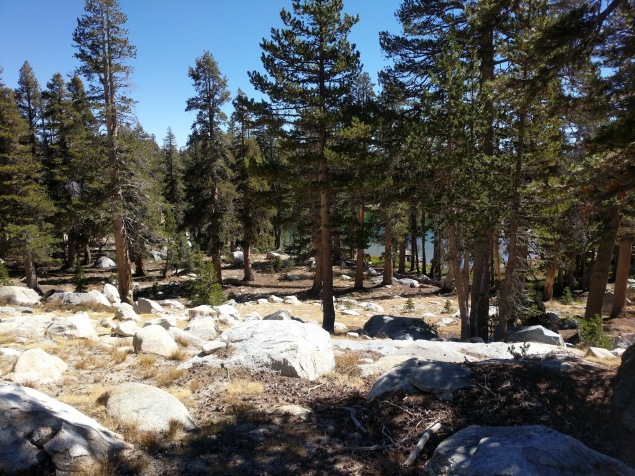 Heading east and back to the trail there is a sign for a cut off to Bullfrog Lake. Now the strange thing is it isn’t on any map I had, but was obviously signed and well traveled. I wanted to head there, but there just was not enough time to get to Bull Frog Lake. However, continuing east another 100 yards and I could see the next lake in view.

The outlet was not flowing to this unnamed lake. The 30% normal snow pack was not helping either, but I was still surprised to see water. The lake is shallow and the water was quite warm. I went out on some rocks to get into the middle of the lake. River stayed on the shoreline carefully watching me before I turned back. Another lake visited and it was time to head back. 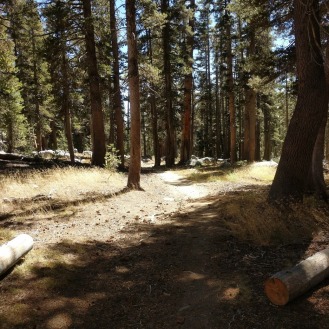 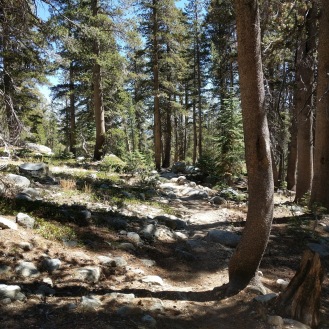 As with all the uphill hiking, that means its all back downhill when you turn around. We visited with the Russian couple shortly after the steepest part of the hike. River was not sure of them. She wasn’t barking or anything like that. She just would not let them touch her, which they respected. Soon we were on our way down the path and making great time.

Over half way down the trail River was tired of being in the back. She heeled the entire way up and down so far. She was only inches away from my trekking poles and heels of my boots. Now she was ready to get up in front, which was not a problem. She pranced along and at first she was constantly checking if I was still there or keeping up.  Eventually she adjusted and kept a nice pace. The weather was warmer and I knew she must be getting thirsty. We only had one small water source before arriving at the truck. 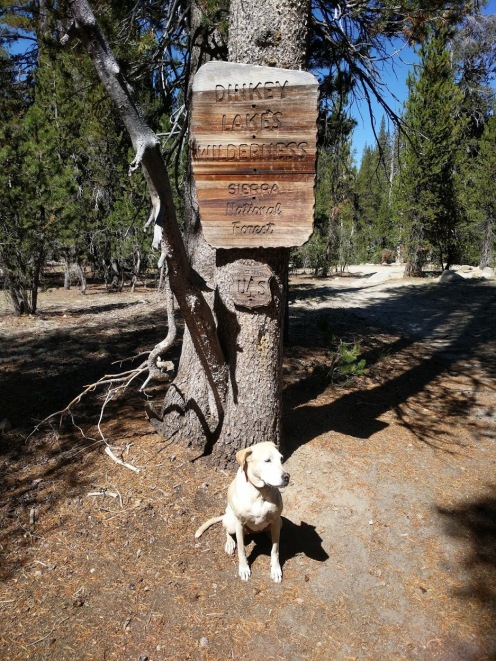 We soon arrived at the nearly dry creek we crossed earlier that morning. I stopped and told River to drink. She lapped up water for a few minutes. Once again we were off, but stopped a few hundred yards up the trail. It was the wilderness boundary where this time I made sure River was in the photo before leaving.

It was not too long after that we saw some guys on the trail. This time River really wanted to meet them. I encouraged it and when we arrived she cautiously let them all pet. I continued to encourage the interaction and she was good to go. I spoke with the 4 guys for about 10 minutes. They were very friendly and River was stealing the show of attention. She loved it. We then said our goodbyes and power walked the last mile to the truck. 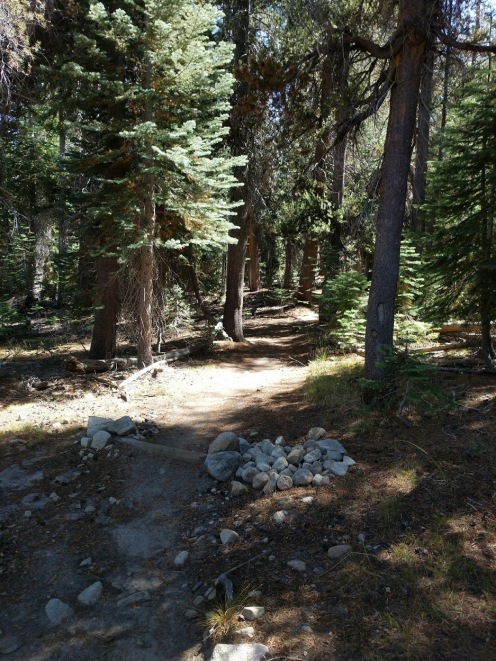 Did I say power walked? Well maybe for a stent but the trail climbed back uphill to the vehicle. I had forgotten about this part, which threw me off a bit. I had to readjust to the hike. Now it was not hard at all, don’t get me wrong. It was more psychological really and I was amazed how quickly that affected my performance hiking up. Needless to say, the climb was soon over and the truck was in sight. Another day hike with River complete. 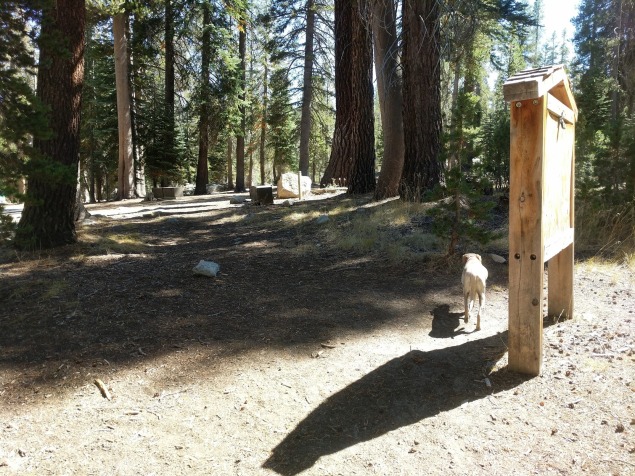 It was a nice hike and felt good to be out on the trail. I do prefer going in the other way myself. I already began thinking of how I could do the loop again. I just needed another day to make it happen. Hmmm.