On Veteran’s Day, both Jaden and I had the day off. We decided to go up into the mountains one last time before winter really set in. The weather was going to be great and we would be out of the smoke from the Camp Fire. Potter Pass resides at 9,000+ feet elevation. Thankfully, you can drive up to around 8,600 feet or so to start the hike. Our plan was to hike up to the Pass, have lunch, and return back to the vehicle. 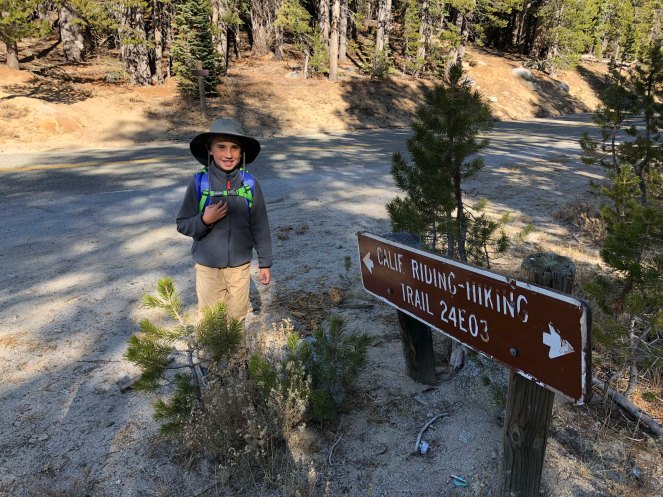 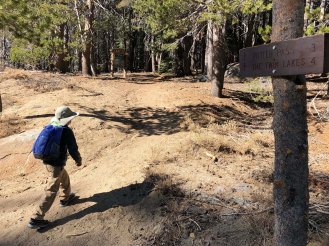 The drive up the mountain was nice. It is a paved route all the way from the valley floor, past Shaver and Huntington Lakes, and about half way up to Kaiser Pass to a place called Badger Flat. Here the trail, California Riding Hiking Trail, comes across the road. We began here and went north across the road and up the trail. We were both excited to be outside and exploring new ground. We stopped by the kiosk on the other side of the road to see what was ahead of us. 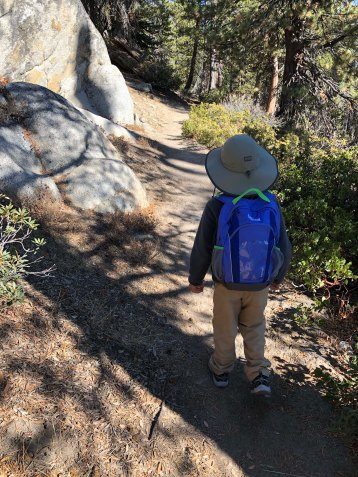 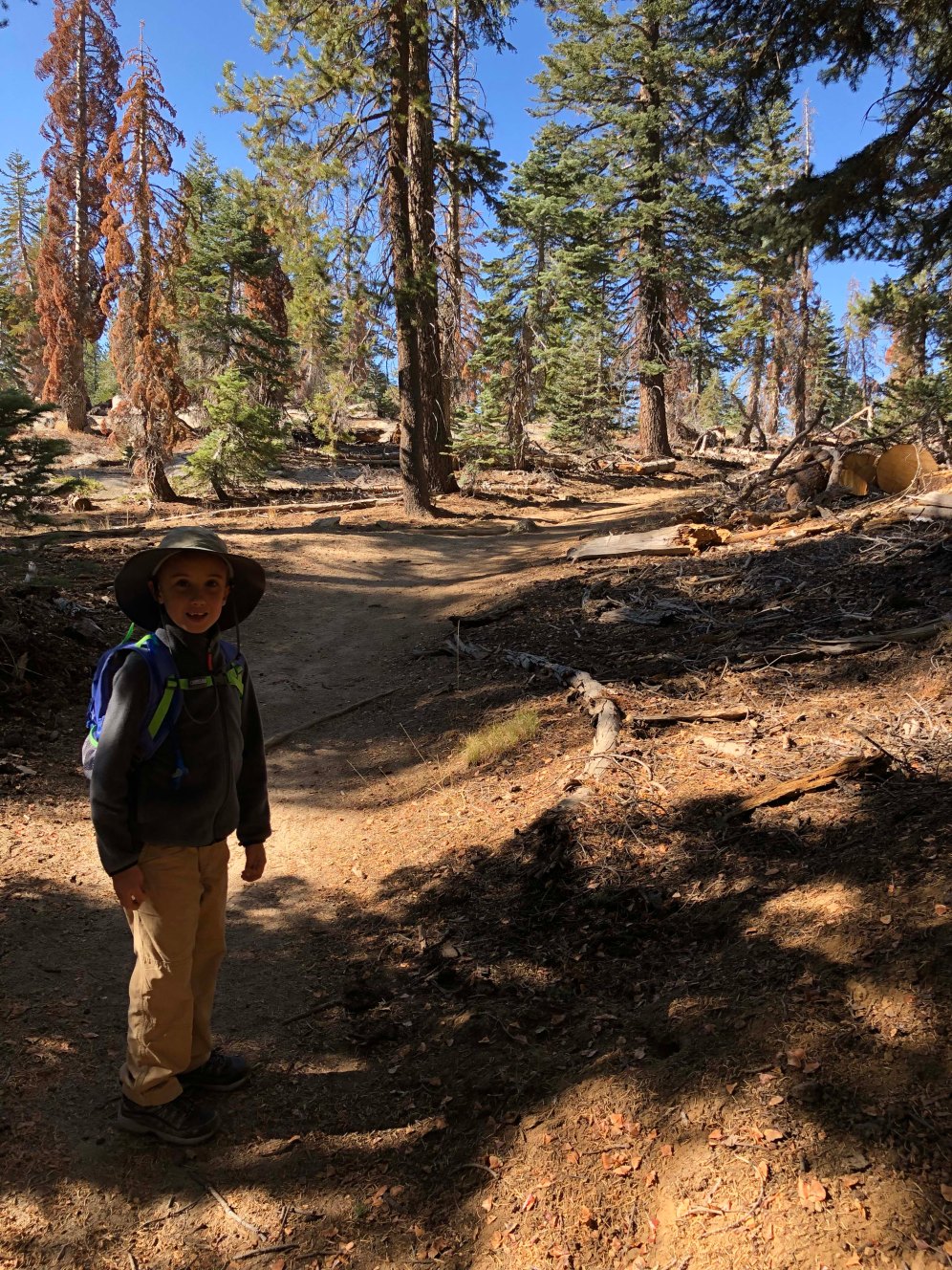 The first part of the trail is the most “uphill” one has to do. It is about a quarter mile at most and then the trail is a gentler grade that counters up to the pass. We took a couple breaks along the way. I was reminding Jaden on how to listen to his body for when it is out of breath and to stop to let it rest. I did not want him to get altitude sickness since he hadn’t been up in the Forest for several months. 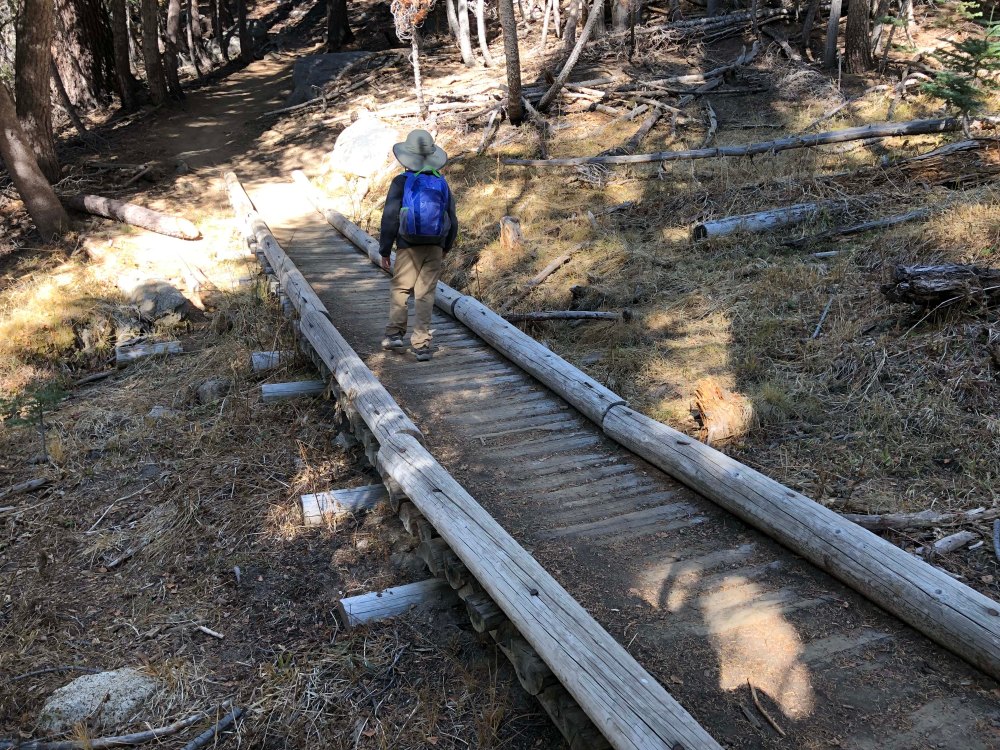 The temperature was cold and was expected. However, this made the hike perfect for hiking. Jaden was in lined pants and wearing a fleece jacket. I was in thermal bottoms, hiking pants, and a fleece jacket as well. Again, we didn’t break a sweat and took our time hiking along. There were no bugs, birds singing, or any twigs snapping in the Forest. It was a stillness and peace throughout our hike. The only sounds were Jaden and I talking or Jaden pretending he was traveling on roads. We did come across the bridge, which he enjoyed crossing.

Many of the creek crossings were small and dry, except for one. It was barely flowing and slow enough to freeze along its edges. I mentioned to Jaden it had been below freezing the night before. Thankfully, the ice on the creek helped illustrate the point of below freezing temperatures. Jaden had fun picking up pieces and trying to break it with his foot. Unfortunately the foot breaking was not possible as the ice in the photo was 3 inches thick! We easily crossed and headed up to a snack spot.

About 300 yards up the trail there was a nice group of rocks. Here we broke out some bars and veggies to eat. It was good timing too as we were both hungry. Shortly after eating we were on our way. The half way point was up ahead on top of a finger ridge. Now that Jaden had energy once more, he became creative and silly. He decided to act like he “fainted” at the half way point, thus wanted a picture of him sprawled over a rock. I gladly went along with it and took his photo before proceeding. 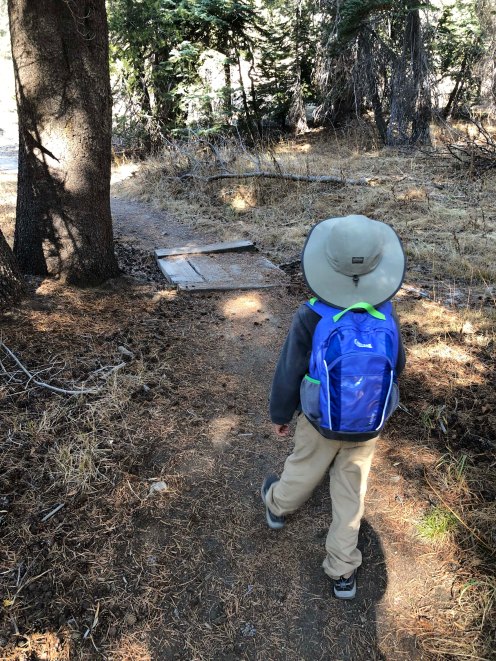 The hike was even easier at this point. I also received service on my phone once more and received a phone call. I admit it was weird to hear a phone ring up in the Forest. It was an important call, so I took it. It only lasted five minutes and we marched along. I sent a few photos back to family so they could see our progress so far. We were now on the final section that lead up to the pass. 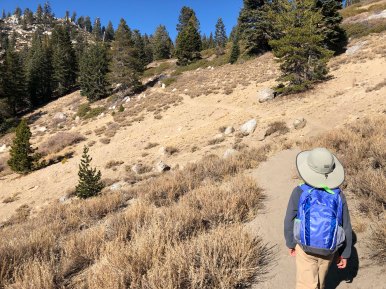 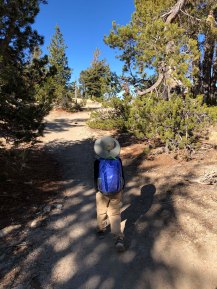 Trees were beginning to fade away leaving us both exposed to the sun. This was fine for a bit but soon we were both getting warm. I helped Jaden regulate his temperature and encouraged him to hike just a little further. I told him there were several signs ahead at the pass, which motivated him. We soon arrived at the pass where a few trails join together. Naturally, we stopped to read the signs before making it our final destination ahead.

Potter Pass is right at the wilderness boundary to the Kaiser Wilderness. We had made it and took a photo by the sign. I climbed up a side hill a little bit for a panoramic view of the pass looking back down where we came from. The best view though was to the north and it is what Jaden focused on.

“It looks like it is from a movie,” Jaden said. I could related to that feeling as it reminded me of when I was a kid seeing the Grand Canyon for the first time. It is so big and beautiful it doesn’t seem real. Thus Jaden I believe was experiencing the same thing here at Potter Pass. He could see Banner and the Minarets in the distance. I showed him where I was on the Lions Fire and then we ate lunch and enjoyed the view. This was the first time I had seen Jaden just looking out over the landscape for a time. It was great to be there to experience it with him. 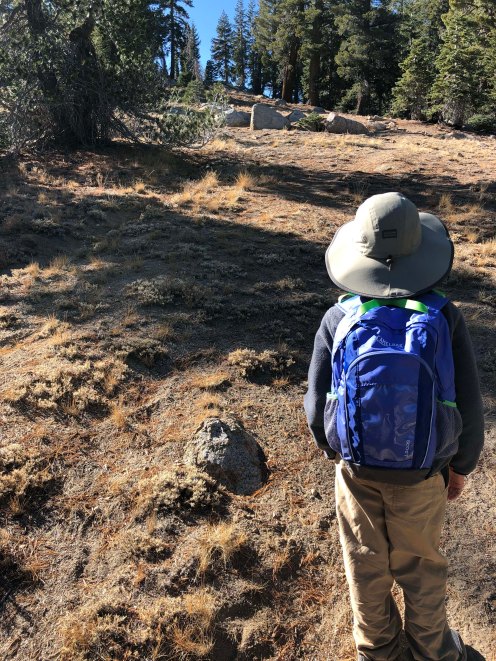 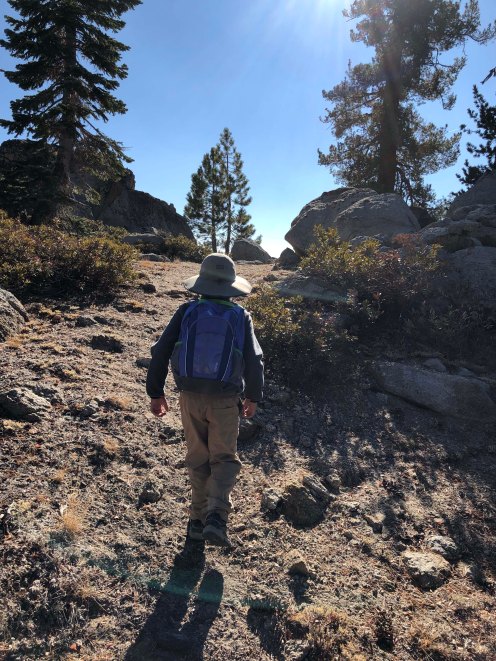 Lunch was now done and we were going to head back. However, Jaden wanted to explore a small peak to the west of us. I think it may be unofficially Potter Peak, so I asked if he wanted to climb up to the top. He was very excited and soon we made our way to the top. It was a good lesson in breathing and taking our time. 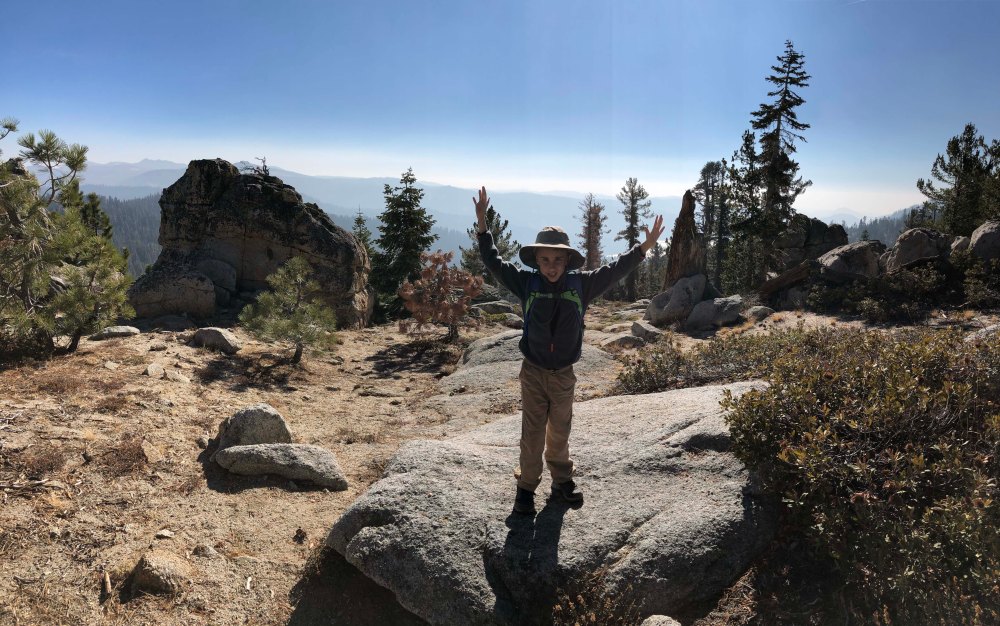 In about 15 minutes we made it to the top. I had him stand on a rock to show he made it. Soon after the photo his stomach was not feeling so good. I think he pushed to hard just after eating, so I had him take a break and enjoy the view. To the west of us and under some shade we could see Kaiser Peak and some lakes.

I told him next summer I think he would be ready for a longer day hike to some lakes back in the Kaiser Wilderness. He was excited about that and decided to climb up on another rock to rest and look out into the wilderness. After this it was time to head back down to the truck and go home. 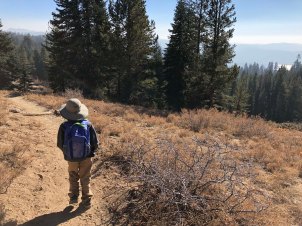 Going downhill there was definitely no worries of being tired. We checked out the trail signs once more before proceeding. Another hiker was coming out of the wilderness and followed behind us. He kept his distance but we would soon let him pass on ahead of us. We continued on and were surprised to see something coming up the trail.

I noticed a dog coming up the trail followed by two people on horses. They too were enjoying a nice day in the forest. We stepped off on the downhill side and let them pass. The first rider told us the dog would not bother us and to have a great morning. She was very nice and the second rider, she stopped to talk for a moment with us. She too was nice and asked Jaden how his hike was going. He said good and mentioned he had never seen anyone riding horses out in the forest before. She smiled and told us to have a great day before we parted ways. 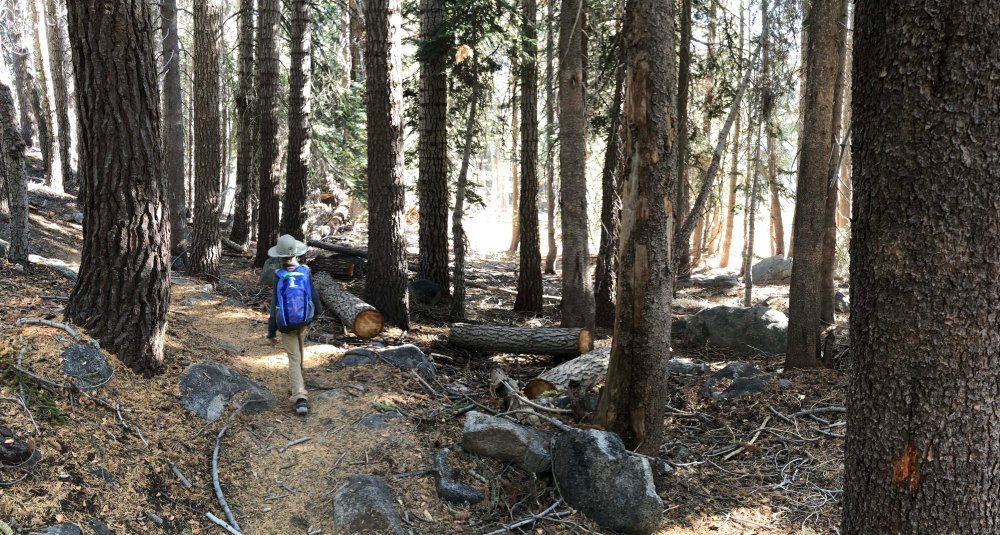 The hike was smooth going. Jaden was done though at the half way point, so I came up with things to do. Since the trail was somewhat familiar, it was time to count all the waterbars and bridge-like crossings we would travel on. This was a big help and with renewed energy, we pressed onward.

When hiking back on the same trail, but in a different direction one can see things they had missed before. The case and point was made when Jaden stopped to see conks growing in a tree stump. He was surprised at how big they were. I told him they are helping break down the tree as that is what their job is out here. He thought on that for a moment and then was ready to keep going. 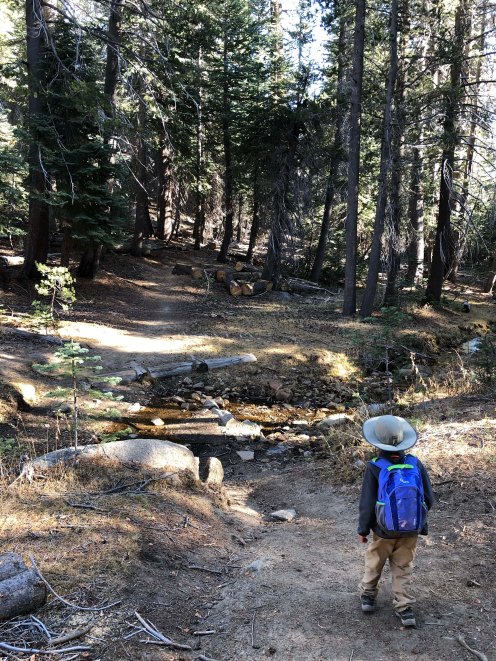 The hike was going well and we soon crossed the iced over creek. This time there was not as much ice. I explained that as the temperature had warmed back up the ice melted, but it would freeze again tonight. We soon crossed the bridge later on and I believe we were up to 35+ water bars and 3 bridge-like crossings at this point in our journey. Getting close to 3/4 of the way done with our hike, Jaden wanted to climb up on a large boulder for a photo. I said go for it and he climbed up, turned around, and posed for the shot. I told him to hold still as I would make it a panoramic one. Then he scaled back down the rock and onward we went. 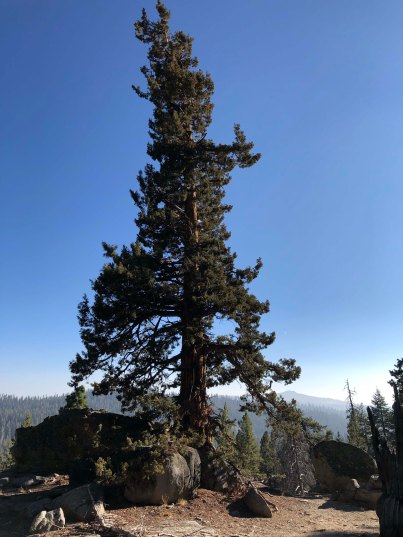 We were soon back down the last section of trail and at the truck. It was a great day hike and I would recommend it to anyone who doesn’t mind the drive. It only took about 1.5 hours of driving and being all paved we drove an average of 55 mph most of the way. It was a great way to get outside again. Jaden talked about the hike here and there for the rest of the week. I’d say he liked it.